I'm currently getting re-acquainted with my home country. Food portions are huge. It's almost agoraphobic how spread out things are. And I'm still not quite used to hearing American accents around me exclusively.

Before a post of real substance - Merry Christmas!
Posted by Jason at 3:16 PM No comments:

London is an umbrella city. Compared to say Seattle, where it also rains a prodigious amount but no one carried an umbrella. In fact, the easiest way to pick out a new Seattleite or a visitor is by their umbrella when it's raining. London has no such pretensions about its foul weather; when things get wet, the umbrellas come out and if you don't have one, you might as well resign yourself to the fact that you're going to look like a drowned rat if you're outside.

In fact, if you have the opportunity to be caught in a sudden rainstorm in London, watch how quickly Londoners can produce their umbrellas - many of them the size of old satellite TV dishes - from their coats, pockets, shoes, or wherever else they might keep them. It's almost like a flash-mob, the sound of dozens or hundreds of umbrellas "shoosh"-ing open around you. And don't you feel dumb for not having one!

Before I moved here, I bought a really nice expensive umbrella. The very first time it was exposed to London rain and wind, the damn thing imploded as though the weight of the rain here was simply too much and it decided suicide was preferable to a lifetime of repelling London wet. I then bought a cheaper but much nicer umbrella from a place in a back street by my office, which I absolutely loved. It was big, automatic, cost me 15 quid and best of all had a hook on the end.

A hook on the end of your umbrella is possibly one of the coolest things you can have. It is infinitely useful. It's clearly a handle so you can adjust your umbrella without moving uncomfortably bending your wrist. Moreover you can use a closed hook-handled umbrella just as if you were carrying your own hook: to open doors, to grab onto railings on the Tube, to reach hard-to-reach objects and pick them up, to slide down clotheslines and to scratch your back. There aren't many ways you wouldn't use the hook!

Alas, I left my awesome hooked umbrella at my office and someone else must have recognized how awesome it was because it is gone. So this morning I ran to Boots and purchased an inexpensive substitute umbrella.

The thing is barely bigger than a dinner platter. It's so small that it looks like I mugged a small child and took his umbrella. The aluminium (that's pronounced Al-Lou-Minn-Ee-Umm here) is so thin and sharp that folding it up is like grabbing a bag of razor blades. As I discovered on my way back to my flat, It will either keep my face, my shoulders, or my back dry, or any combination of the two, but not all three at the same time.

And no hook. That should have been my clue.

On Monday I'll spring for another hook-handled umbrella. Until then, I hope it stops raining.

Photo: Shelter by unrelaxeddad on Flickr, used under a Creative Commons license.
Posted by Jason at 2:17 PM 2 comments: 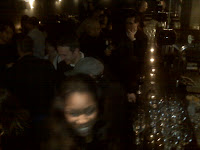 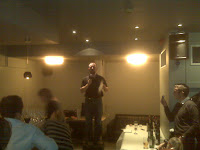 Update: Rob writes in the comments that the Rioja was the Dinastia Vivanco Crianza 2004, oops! Fixed above. My fault for not taking better notes.
Posted by Jason at 6:41 AM 4 comments:

Apparently it was yesterday according to this post but I had it in my mind it was today. Oh well.

One year (and one day) ago I was stumbling around Heathrow and then Holborn, shaking off the sleep and adjusting my internal clock to my new home.

And what I said in the linked post still holds true: it's good to be back. Wouldn't have traded this last year for the world, and the coming year will be even better!
Posted by Jason at 1:08 PM 3 comments:

A Taste of Home 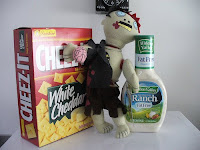 My friend Angela back in Sunny Seattle sent a birthday package that was stuffed with a few pieces of home as well - that best of all gifts for the ex-pat, the care package. The things inside need not be expensive, just things you can't find here. For example, White Cheddar Cheez-Its. Or Fat Free Hidden Valley Ranch salad dressing. Other great items include Dial soap and real Q-Tips, but I digress.

Angela sent the Cheez-Its, a gift similar to white gold. The Beautiful Competition and I have been enjoying them all afternoon. And yes, that is one of my birthday presents in the middle - a plush zombie complete with removable velcro-attached limbs - and a velcro-attached brain in its hand. Pure awesomeness.
Posted by Jason at 5:01 PM 1 comment:

On Sunday, Elizabeth and I had our first Thanksgiving in London. A few days late, but who's counting?

Rather than a turkey, we made a chicken.

Rather than friends or family, we ate with our cats who are both friends and family. Of sorts.

Rather than watching football, we watched football crowds from Emirates stadium file past our flat.

It is times like this when I feel the most homesick, that I have to remind myself of the adventure and the opportunity of being here. The good news is that my passport should arrive back soon and I'll be free to travel abroad again, and Elizabeth and I are planning where our adventures will take us next year, and perhaps more importantly what comes next after this adventure.
Posted by Jason at 1:33 PM 2 comments: