I don’t take much stock in ley lines, the supposed alignments between ancient sites (and in some modern mythology, where the planet’s energy, magnetic or otherwise, is stronger.) I can say with some authority that certain parts of London hold a kind of energy, of which I make no claim that it is spiritual or magnetic or otherwise.

But consider the layers of history and emotion here, and that twenty million people are packed inside the M25, and it’s not difficult to imagine that a person could feel this energy in some regard. Certain streets that are dark even in summer’s broad daylight, or areas that constantly feel like a party – whatever that might mean.

It’s easy to imagine London as a giant network or jigsaw puzzle of areas like this, little regions held together by sinew-streets that bind the city and its inhabitants like a spiderweb. Even underground just passing through certain stations allows you to pick up a brief but tangible piece of what lies Above.

When people say London is magic, I will agree for this reason alone.
Posted by Jason at 5:29 PM 1 comment:

Finally: A Group I Want To Join 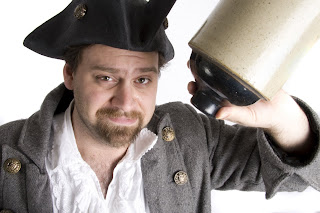 The event schedule be sketchy for this year, but last year's events included a rum tasting and monkeyn' about on the Golden Hind, which that scurvy dog Drake was kind enough to lend.

Who knows where we be settin' sail this year? But strike me down and call me a one-eyed parrot if I not be attendin!
Posted by Jason at 6:33 PM 1 comment:

Wow have I been bad about updating this blog. I offer two excuses: work has been busy, and perhaps bigger - I've been immersed in a pair of personal writing projects. We also haven't been doing much 'around London' stuff.

But - we did make it out to Wales over the Easter weekend, a nice four days on the Cambrian Coast. The trains there were FUBAR'd for several reasons: death on the tracks at Euston, then delays that caused us to get in far later than we wanted. But we had two solid days of sun and hiking; we stayed in a little B&B in Harlech, which is, as they say, "way out there." Very little tourist infrastructure, but that's fine. Snowdonia National Park was right there so of course we got some hiking in.

The 'tourist' highlight was Harlech Castle, one of the famous 'iron ring' of castles built by King Edward ('Braveheart') I to subjugate Wales. Several of Edward's castles are exceptionally well preserved, including Harlech, which may be one of the easiest to get to because of the train line into town. The castle is a World Heritage Site and is remarkably well-preserved, despite having fallen in several sieges and its curtain wall being mostly destroyed by cannon fire.

There's something to be said for leaving the tourist track a bit, even if it becomes inconvenient (especially when you don't have a car.) There's a certain authenticity that comes with staying in places that aren't designed to shuffle tourist dollars through, most notably in people's attitudes. Tourists are something you deal with, and it's almost a kind of false hospitality in a tourist town because you're there to Spend Money. In places like Harlech, you're there because you want to be there and the locals recognize it. They may be surprised, but it's a more genuine- authentic - feeling.