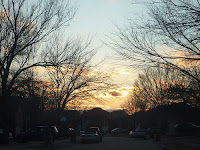 It's amazing how business-efficient you can be when you're seeing friends and family, and that's how I'd describe my first trip back to America since moving over here: efficient. The Beautiful Competition and I were gone thirteen days, the longest we've left our cats alone since we moved, and certainly the longest trip we've taken since coming here.

Almost immediately after arriving in Tulsa I turned around and flew to Denver for a day to see my grandparents, who seem to be hanging in there. It was great just to spend some time with them (especially without any other family members), play cards, tell stories, and so forth; I even heard a couple from my grandfather I hadn't heard before. Then it was on a plane to Kansas City for Angela and John's wedding. They normally hang in Seattle but KC is where Angela's family lives and John's family isn't far, so it made a good central meeting point. Crabby, Roger and Roger's girlfriend were there as well so it was an excellent opportunity to hang out with at least some of the old crew and get to know new crew members. The wedding was perfect; not overwhelming like some weddings can be, and about intimacy and love, as weddings should be.

Then it was a frazzling late-night and early-morning drive back to Tulsa for the holiday fun. We did our usual two Christmases, one on Christmas eve with my family, the other on Christmas day with the Beautiful Competition's much-larger family. I also met my brother's new fiancée and quickly learned she's going to make a great member of the family.

The stay was just about the perfect length; family vacations, especially ones where you have to see everyone with business-efficiency, are never relaxing but this one was exceptionally low-key and almost 100% stress-free.

I expected that this trip home would solidify for me the tentative plan to come back in a year's time, and I did in fact feel like I should be heading 'home' to Seattle rather than 'home' to London. But the strangest thing happened on the cab ride from Paddington to our flat - I realized that London itself was very much becoming like home, where things no longer seem strange and unfamiliar here but are instead very much recognizable for me on many levels. Which is to say that London, oddly enough, feels like a new home.

This is my city as much as it is anyone else's now, I reckon. And if there's anything that 2009 will bring, and any kind of London-related resolution for me, it is this: so far I've had a relationship with London first as a tourist, then as a working resident. Now, the Beautiful Competition and I both agreed that it's time to treat London more as a lover, something we do in fact like and even adore from time to time, temperamental as it can be. As with anything, we'll get out of London what we put into her, and we've put quite a bit in this last year in the way of time and energy - so it's time we started taking a little more out.