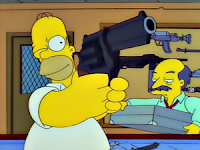 I don't watch a lot of television as a rule, but the other day I had The Simpsons on in the background. The episode was the 9th season classic "The Cartridge Family," where Homer buys a gun to protect his family. In typical Homer fashion he gets a little extreme: shooting the TV to turn it off, shooting the lights to turn them off, shooting a can of beer to open it, and so forth. Marge ends up taking the kids and leaving after Homer fails to get rid of the gun. The end of the episode has Homer handing her the gun and saying he can't get rid of it himself, so he asks her to do it for him.

She goes to put the gun in a trash can, sees her reflection in the can's shiny lid, likes what she sees - and decides to keep the gun, placing it in her purse and walking out.

At least, that's how I remember it ending.

The version that airs here, Marge opens the can - and the show (awkwardly) cuts to her walking out of the room.

It is clearly intentional censorship; I've noticed pieces of it before - for example, the episode of Futurama where Bender becomes Santa Claus, there's a scene of a kid writing about how his dead grandfather is starting to smell, and the camera cuts to a dead old man's body - but the cut was missing from the version I saw, sanitizing the joke slightly. That kind of censorship I can at least understand. But "The Cartridge Family" kind took it to a whole different level.

It changed the entire meaning of the episode. Marge's decision to keep the gun after being so adamantly against is a powerful statement about the allure of owning a firearm, and is one of the more morally ambiguous statements in any Simpsons episode. (In fact, I remember not liking the episode the first time I saw it for that very reason - ah, youth.) Removing the scene completely also removes that moral ambiguity. And I cannot think of a legitimate reason why it would be cut apart from a censor deciding to change what the artist created. There are no laws (that I know of) restricting showing guns - Homer clearly had one and shot at household items all throughout the same show. Crime dramas are available on nearly every channel. No, this was insidious and intentional censorship to alter the meaning of the episode itself, and it is disturbing on many levels.

I've noticed a trend in the UK to simply put your trust in the government. They will do the right thing for you, they have your best interests at heart, they exist for the welfare of the people. Right? No. This is a clear example of why that isn't the case. People don't need to be protected from art or satire. People don't need to be told what to think, or worse, have their thinking manipulated through some nameless government (or commercial - this was on a commercial network) scrub imagines they know what's best for everyone.

To put it in Yankee terms: Fuck. That. Noise.

Seeing such a blatant display of censorship, especially of a thought-provoking piece of satire, very much ruined my faith in old broadcast media here. Not that my faith was terribly high in the first place, but I have to think: if they're willing to cut a few seconds out of The Simpsons to change the meaning of the episode so that people may not consider why gun ownership isn't as simple as a buffoon shooting at a beer can or throwing a gat in the garbage, then what else is being changed?

It's not a pleasant thought.
Posted by Jason at 8:53 PM

Who knows when and where the change was made? Your best bet is to take it up with Channel 4 - might it have been there (something to do with it's being shown here in the "family time" early evening?) or by the production company to maximise sales opportunities?