Getting Out Of The Smoke and Into The Country 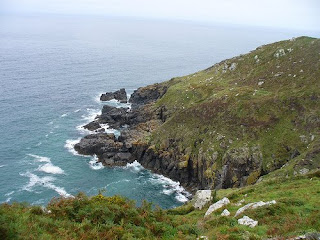 There comes a time in every Londoner's life when that person thinks "Jesus H. Tapdancing Christ, this is a giant, energetic, polluted metropolis full of miserable assholes and if I don't get out of here I might just snap the next time the clerk asks me if I have an Advantage card." That time was nigh so the Beautiful Competition and I packed our bags, booked a train and got as far away from the Big Smoke as we could go, by heading straight west. Cornwall. St. Ives.

Cornwall is an unusual place. Historically speaking, it remained Celtic longer than the rest of Britain, and after the Romans left it remained "Romanized" long after the Saxons set up shop in the eastern part of the island. In fact, after the Roman pull-out, the last remaining operable seaports were out in Cornwall. It's farm and fish country, then it became mining country, and now it's artistic and tourist country. Yellow sand beaches, overpriced restaurants and even the occasional sunny day. So we, along with thousands of other tourists, descended and made the most of nine days out of the City.

We did so with no agenda in mind; this was a holiday designed to relax. It was our replacement for a 'let's go to the beach and drink those little drinks with umbrellas in them served to us by dark-skinned natives' holiday that would have been way too expensive. We got sunburns and I even swam in the ocean a bit (although, I admit, I was gasping at how cold it was) and took a very 'whatever' approach to things.

The first couple of days were 'sit on the beach, putter around town and relax' days. St. Ives is a fairly famous art colony, with its own Tate gallery (!) and a long tradition of landscape and modernist art. The landscape is rocky and rugged, with high granite cliffs dropping into jagged tidal pools where seals bask. It has inspired literary types of all kinds: the Godrevy ligthhouse in St. Ives Bay inspired one Ms. Virgina Woolf to write To The Lighthouse, and the nearby town of Zennor was where D. H. Lawrence composed much of Women In Love. It's not hard to see why: it's a wild land, and its rural nature and tourist draw has allowed it to avoid some of the economic pitfalls that other places in England have experienced. Which isn't to say that stuff didn't exist, just that the vibe was a little less intense.

A massive hiking trail circles the entirety of the area - the South West Coastal Trail - and we did a piece of it, walking into Zennor from St. Ives through fields of heather and over rocks the size of tractor-trailers. Logged a good 9.44 miles on the GPS, and got some amazing pictures. 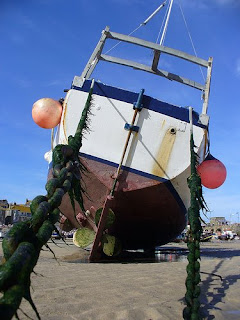 We planned a trip to the Isles of Scilly, the westernmost point in England some 28 miles off the coast, but ended up scrubbing it the morning of because the helicopters weren't flying due to the mist and fog. Welcome to England! So we saw most of Penzance (the town of the pirates fame) and ended up bussing out to St. Michael's Mount, an island-fortress that is only accessible at low tide, by foot anyway. As we discovered, when the tide comes in and you need to take the ferry back, it costs money! Piracy is alive and well in Cornwall!

The trip was well worth it; we both ended up sunburned, relaxed, happy and destressed. Coming back to London was hard; on our way back from breakfast this morning, Liz remarked that London still smelled badly when it was wet. I agreed; it's like a dog in that it's alright most of the time, but it's really kind of stinky and when it gets wet it only gets worse. So it's good to get out and relax.

On a more personal level, I got a ton of writing done and did some pretty strong thinking about a lot of things - my future, priorities, and so forth. But I'll save that for the Puppet Show.