Going Down to Durham Town 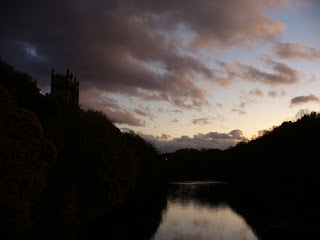 I can't explain why Durham despite a lot of my coworkers asking me 'why the hell Durham?' For most people, it's a stop on the train line between London and Edinburgh, or at the very least the last stop before Newcastle and one of those towns north of York. It's got a cathedral sure, but what else?

I'd be lying if I didn't say that the cathedral was a huge draw for me personally. A massive Norman edifice and the most well-preserved Norman cathedral in the country (in the world, likely) it shows the transition in architecture from Norman / Romanesque - the style that copied what the Romans built - to Early Gothic, the style that replaced it and is most commonly associated with European cathedrals. You can quite literally see the seeds of the transition in the building itself, as the early parts of the cathedral are pure Romanesque while the last parts have the barest beginnings of Early English Gothic architecture, where the techniques that would create the masterpieces of Canterbury, Notre Dame and Rheims were first tested.

Durham is a small college town and certainly has that feel; it's an English market town with its own high street, surrounded by coal country and has suffered with the rest of the North in this regard. But it's still a small college town and therefore has a certain vibrancy about it as well. The weather was perfect on this visit (I've been twice before): crisp without freezing, leaves still on the trees in a rainbow of colors and no rain at all.

I managed to wrangle a private tour of the cathedral which was great, and the reason (excuse) for our visit was to see Yorkshire folk singer Kate Rusby, whose amazing voice and kicking original songs I've kind of fallen in love with since Simon introduced me to her soon after I moved here. Here's a (professionally recorded) video of her live in Leeds:

The best part about Durham was simply getting away so easily and enjoying a great weekend together where we could just walk around in the gorgeous Autumn weather, enjoy a pint and put our cares away for a while. I have a feeling I might have to get back one last time before I go back to America.

Bonus: Kate's cover of The Kinks' Village Green Preservation Society (with stills from Jam and Jerusalem, the show for which she covered it):